The Thunderbolt of Enlightenment

Over the weekend my family headed up to Sonoma for a quick overnight get away and found ourselves awash in the complexities of life. What we intended to be a relaxing break became a paradoxically stressful experience. The children were perpetually cranky, the schedule surprisingly unaccommodating and the relaxing somehow less than refreshing. This is not to say that the experience wasn't enjoyable for the pool was refreshing, the morning yoga in the sun was beautiful and we enjoyed the time together without an expectation of accomplishment.

It was while perusing a photographer's gallery that I first spotted the dorje. Gracefully being held by a Tibetan nun while in meditation, the elderly hands of this amazing woman grasped the dorje with both reverence and strength. Only occupying a small portion of the scene, the dorje clearly was of immense importance to her.

A symbol of enlightenment, the dorje represents the sudden form of enlightenment that comes upon us. In combination with the accompanying bell, the imparted meaning conveys both wisdom and method. Far from being symology unique to Eastern cultures, the dorje symbol appears in early Christian artifacts. The lightning bolt flash of enlightening light is even clearly described in Acts where Saul suddenly realizes his purpose.

We should take particular notice of enlightenment being described as a combination of wisdom and method. One could describe much of religious rituals as a means to come into union with God. Our ritualistic methods aim to remind us of our role to play, our relationship to God and the importance of remembering God in our lives. But in combination with wisdom, the pursuit of enlightenment positions our actions in line with purpose as opposed to mindlessly following our religious methods without direction.

Unfortunately many interact with God's intent as a down payment on the after life. The prevailing habit is for us to approach life as a reckoning series of credits and debits towards a singularity of judgment. In this cosmic accounting farse, our crimes against ourselves and our fellow man will be reconciled against those times we followed God's laws. In the end, we fool ourselves into believing that our credits will exceed our debits to our advantage. Somehow we believe we will be walking single file past the pearly gates of heaven while those that didn't have enough credits will descend into the fire pits of hell.

Enlightenment postulates that our reckoning is not only not temporally in the future but also not judged according to a standard. Divine wisdom makes a life fulfilled in purpose attainable in the present moment without aspiring for future bliss. The thunderbolt of enlightenment cracks into our consciousness all the time, but as we are lost in the delusional reality of our Minds, the flash of wisdom flows by us like the wind blows through the leaves.

In the distance, we can hear the rustling of the branches and the rifling of the leaves but we struggle to here the message contained in the wind itself. We turn to doctrine to guide us to the divine but find that glimpses of enlightenment are all that are available to us. In time, we conclude that the messages aren't there, God doesn't talk to us and we are not intended to live like the prophets of the past.

The dorje reminds us that enlightenment comes in an instant but the attainment of wisdom comes through method. The method we choose is neither important nor mandated despite our Mind's desire for absolutes. God's wisdom is available to all and will not be limited to those that adhere to ritual, doctrine or even method.

The pursuit is in purpose and, in purpose, enlightenment is available to us all.

In my forsaken weekend get-a-way, I was reminded that enlightenment is available to us not only during times of calming focus but in the midst of life unfolding. My cranky children demand that I recognize that enlightenment doesn't come to those that retreat to a cave for ten years of meditative reflection but rather that life, in glory and pain, is alive with messages from God. We struggle to hear but, through method, we can hear the wisdom blowing through the trees of our life.

Grab your dorje and hold it with reverence and strength. 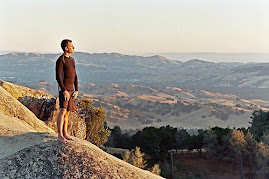